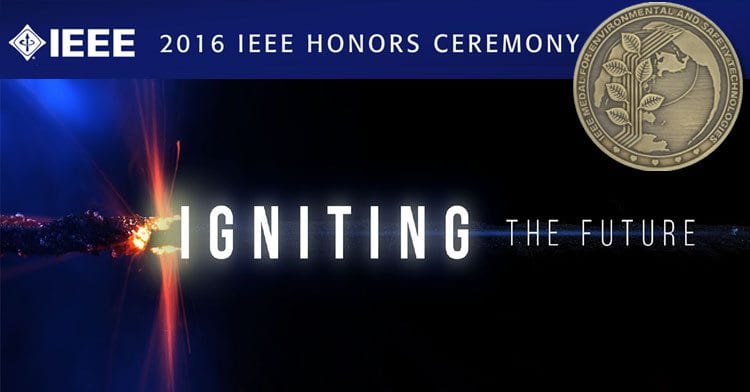 the IEEE Medal for Environmental and Safety Technologies for being the first company in the world to commercialize an electronically controlled injection system (diesel common rail), which has made a significant contribution to the spread of clean diesel vehicles. Theaward ceremony was held in New York on Saturday, June 18, 2016, and was accepted by Executive Vice President Masahiko Miyakiand Executive Directors’ Yukihiro Shinohara and Katsuhiko Takeuchi.

Notably, the common rail system helped expand the market share of diesel passenger cars in Europe. In 2013, DENSO developed and mass-produced a system that achieved ultra-high pressure injection of 250 MPa making emissions cleaner than ever before. Prior to this, in 2012, DENSO became the first company in the world to mass-produce the i-ART (intelligent Accuracy Refinement Technology)system. A pressure sensor is built into the fuel injector to measure the injection pressure on a real-time basis and control the timing and injection volume for each injector, helping increase fuel efficiency and reduce the amount of hazardous substances in the emissions.

DENSO will continue its efforts to increase fuel injection pressure and accuracy in order to meet the increasingly strict emission regulations around the world and the growing need for higher fuel efficiency. Furthermore, DENSO will deliver products that meet the regional needs of its customers around the world.

About the Institute of Electrical and Electronics Engineers:

Headquartered in the U.S., IEEE is the largest organization in the world that specializes in the electrical and electronics field. It mainly serves as an engineering institute and as an industrial technology standardization organization.

About IEEE Medal for Environmental and Safety Technologies

An IEEE Medal is awarded to researchers, engineers, or teams (who are selected by IEEE each year) who have significantly contributed to technology innovations and the development of businesses and industries. An IEEE Medal for Environmental and Safety Technologies is awarded for outstanding accomplishments in the fields of the environment and safety.